My latest book, Sons of Alba, Book 2: Son of Redemption, centres around a real, pivotal battle that one way or another changed the face of Scotland.

Funny thing is, in all the research I’ve done on this battle, virtually nothing is known for certain – the year, the motivation, the leader of the Anglo-Saxon army – almost all of it is up in the air.  Was it in 1016 or 1018 AD?  Did the Saxons invade Alba, or was it the other way around?  Did Uchtred lead the Northumbrian army, or was it his brother Eadwulf?  Everyone who knew without a doubt is dead, and they aren’t telling.

What we do know is this: Carham changed the map.

Before the battle, the kingdom of Lothian was firmly in the grasp of England.  After, it belonged to Alba (Scotland).  Also, the kingdom of Strathclyde, Alba’s ally against the Saxons, passed into Alban hands when their king, Owain the Bald, died on the battlefield.  He left no heirs, and history records that the new king was Duncan mac Crinan, High King Malcolm II’s grandson and the future Duncan I of Alba.  So, in one campaign, Alba consolidated the borders that we recognize today as the southern limit of Scotland. 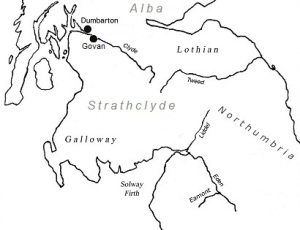 I wonder if Malcolm II knew, when he set out across the River Tweed, that he would change history in a single battle.

That battle has certainly changed life for two of my characters, Donnchad and Seumas.

4 thoughts on “Friday Fact: The Battle of Carham”