When the average settler, like William McKillican, arrived in Upper Canada in 1816 it may have been a trackless wilderness, but there was already a strict ruling oligarchy in place. 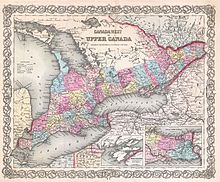 They were known as the Family Compact – a group of Conservative British Anglicans who held a staunch hold over the young colony.

If you were a United Empire Loyalist or new settler from England, if a banker or a lawyer, or a member of the Anglican clergy, then you had an “in” with the Family Compact.

On the other hand, if you were poor, uneducated, Catholic or other Protestant, or (heaven forbid) a later American defector, then you might be out of luck.

One has to understand, though, when considering the motivation behind this seemingly harsh clique, that all this followed on the heels of a very messy revolution and a recent invasion.  After the War of 1812, suspicion of American sentiment abounded.  It may have seemed safer to Loyalists such as Hamilton, Osgoode, and Strachan to keep a sense of cohesion, centred around Tory politics and Anglican worship in order to stamp out dangerous ideas like democracy.

By 1840 the Family Compact had lost their power, but not before establishing a strict order that one might argue preserved the colony from American rule long enough to become the country we love today.

And the Family Compact couldn’t have been all bad.  Although William McKillican was far from a Conservative Anglican, he had a long-term friendship with Bishop Strachan, to the point that Strachan even offered to let his fellow countryman take orders with the Church of England.  Despite William’s refusal, they maintained a correspondence throughout their lives.