In this latest excerpt from my Renaissance time travel story, the hero meets a hero of his own, the artist Botticelli.  Please feel free to share any feedback, as honest as possible.  🙂 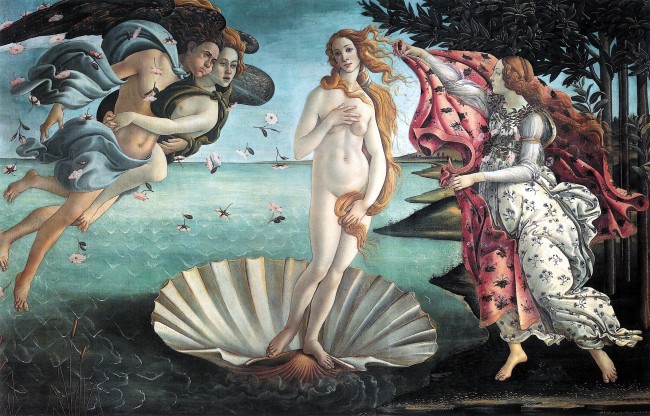 Mason recognized Sandro Botticelli easily from his self portrait, picking him out from his apprentices at once. A man of around forty, with a mop of greying brown curls, wide-spaced grey eyes, bowed lips and prominent cleft chin, he couldn’t have been anyone else. Besides that, he looked up at his entrance from a large canvas, paintbrush in hand.

“This is a private studio, signore,” he said mildly, continuing with his art. Aside from a quick glance, his students continued with their work, ignoring the newcomer.

“I’m sorry to intrude, Signore Botticelli. It’s just that Bertoldo di Giovanni thought you might be able to help me with a mystery.”

He raised his eyebrows and took another look at Mason, weighting him with his cool grey gaze.

“What is this mystery.”

“A painting. Bertoldo thought it showed some similarity to your work.”

Botticelli put down his paintbrush and walked over, peering at the phone Mason held out. He frowned.

“That is unlike any other painting I’ve seen. What is this type of wood?” He reached out for the phone as if to touch it, but Mason pocketed it quickly, before the touch of the artist’s finger could change the screen.

“Do you know the artist?”

Botticelli shook his head. “It’s not mine, nor any artist I know.”

Mason sighed. That was that, then. It was unlikely he’d track down the artist now. But then another thought occurred to him.

“Do you perhaps know the model?”

The artist thought for a moment, then shook his head. “She does not look familiar.”

Mason must have looked crestfallen, for Botticelli’s face softened.

“Are you an artist, yourself?”

The painter seemed to weigh his thoughts. Then he beckoned Mason around to see the front of his canvas. “Come. Tell me what you think.”

As Mason stepped around the enormous canvas—which was nearly as tall as he was, and half again as wide—he caught his breath in awed recognition.

He would know this painting anywhere. It was more familiar to him than his own reflection, as much as he had stared at it. He knew every brushstroke, both the ones already on the canvas, and the ones still to be painted.

“The birth of Venus,” he whispered.

“You know it?” Botticelli was pleased. “I didn’t think I’d painted enough yet to identify the subject.”

“A guess. I can see the sea shell here.” He held out a finger but carefully did not touch the canvas. “Venus was born full-grown from the sea, was she not?”

“Indeed she was.” He gazed at the contrapposto figure, only just sketched out in plain tones awaiting contours. Something in his eyes reminded Mason of the way he looked at La Bella Ragazza.

There was a theory that the model for The Birth of Venus was a noblewoman Botticelli knew, Simonetta Vespucci. More so, that he was in love with her. He had asked—or rather, one day would ask—to be buried at her feet.

The art scholar in Mason burned to know if this was true, especially watching the light in the older man’s eyes as he studied his painting, but he knew enough not to ask. Instead, he too gazed at the painting, into the hazy eyes of Venus, the likeness of a woman now dead for a decade.

And suddenly Mason answered one question in the sea of mystery in which he foundered. If Sandro Botticelli was just now painting The Birth of Venus, then the year was between 1484 and 1486.

He breathed a heavy sigh, as though he’d been drowning, and this one nugget of truth had given him a gasp of air.

Mason shrugged. “It was a long shot.”

The artist smiled, chewing on his lip for a moment in thought. “I probably shouldn’t do this, but …” Then he stepped closer, so his apprentices couldn’t hear.

Intrigued, Mason leaned in to listen.

“My patron, Lorenzo il Magnifico de Medici is hosting a masquerade ball tonight. I would like to bring you as a guest. If you are to discover anything about your mystery painting, it will be there. Besides, I have a suspicion that he would be most fascinated by you, and Lorenzo loves to be fascinated.”

Mason’s eyes widened. “I would be honoured, Signore.”

Botticelli shook his head dismissively. “It’s nothing. But just understand that my reputation is at stake.”

“And so I must insist on one thing.”

Mason looked at him in question. But instead of answering, the artist called one of his apprentices, a young boy of about twelve who was grinding pigment in a mortar, to come over. Obediently, the boy trotted to his master’s side.

“Take this man to my tailor, and tell him Sandro sent him.”

Mason remembered his modern attire with a start and laughed at the dubious expression on Botticelli’s face.

“They must dress very differently where you come from.”

“Indeed, they do,” Mason replied. If you think the men dress differently, he thought, you should see the women. 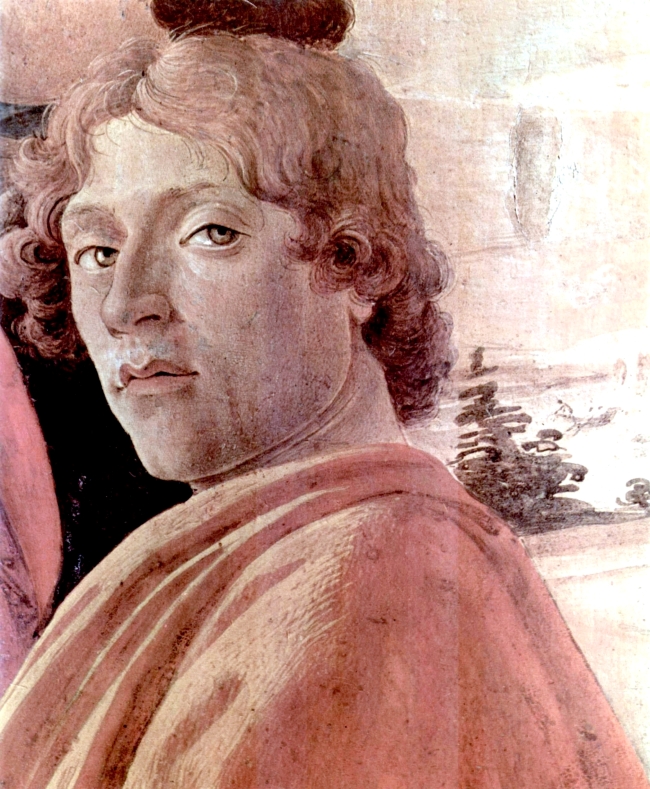